Most people heard about Kony about a week before Trayvon Martin. The "Kony 2012" campaign attempted to manufacture worldwide fame - worldwide "viral marketing." The experts in that will tell you that manufactured "buzz" or viral makreting almost never works. When corporations attempt it, its usuall a clumsy flop and look very uncool.

And what did we see? As quickly as the "Kony 2012" campaign rose, it fell apart, because its foundation was bogus. The founder is going temporarily insane (probably from the sudden fame and pressure) and was caught by the cops drunk and acting lewd in public. And there was that quick backlash against both their charity and the video itself. 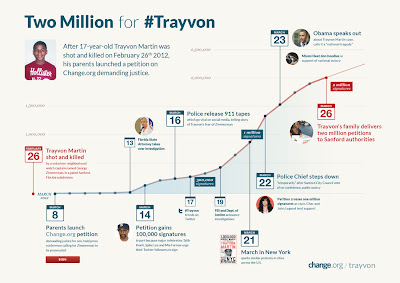 Meanwhile Trayvon was killed more than a month ago (February 26). Initially there was little attention at all. His parents had nowhere to turn so they did an ipetition on change.org. It grew naturally, and grew and grew and grew. As of March 26 - exactly one month later, 2 million had signed. There were mass protests across the country last weekend.

You've got some of the very same "influencers" that the Kony campaign wanted to get to join the Kony 2012 cause, but they're putting on hoodies for Trayvon or speaking out. (Miami Heat, John Legend, you name it.). Kony 2012 had the goal of getting key US Reps and Senators involved - Trayvon's case got the attention of the President himself.

And, most importantly, the Kony 2012 campaign wanted ordinary people in the hundreds of thousands to get involved in small tangible ways that grow the movement, and that's exactly what you see happening - but for Trayvon.

Which approach do you think is more effective? The answer seems pretty clear.


PS - "Kony 2012" called for April 20, 2012 to be a night of hanging posters across the country and the world. Perhaps we should do that for Trayvon and against racial profiling.
Posted by Jed H at 5:30 PM

Text "votejed" to 23559 to receive text/SMS alerts during the campaign. We'll only text you for important reminders.